Skip to content
Posted on May 2, 2017 by Aaron Wallrich 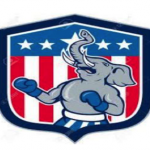 Welcome to the first edition of Elephant Tales for 2017, and the very first edition under the new editor, Alysia Pillsbury. My e-mail address is listed on the final page. Feel free to send any comments/suggestions. I am certainly open to new ideas as I begin this endeavor. The newsletter will include updates from local, state and national government issues.

As we continue to smile victoriously, we must remember that we cannot become complacent. The fight is never over. ~ Alysia Pillsbury

CHECKING OUR BACK TRAIL:

District Caucus –   Shawano had the privilege of hosting the 8th District Caucus 11 March. Shawano had 62% of its authorized delegates attend the Caucus. Impressive!! Amy Olson did her normal bang up job running the raffle and we increased our bank account by over $200.00. We had three High School Students assist (Gage – Chris – Nate). Always involved, Ginny and Mike Jesse helped set up Friday night and Saturday morning. Thank you everyone.

Senator Ron Johnson spoke and participated in handing out the “Ladder award”. Our own Amy Olson was presented with this achievement award. We had the privilege hearing a Conservative Candidate for DPI Dr. Holtz. Dr. Holtz wants parents to control their Childs education and Dr. Holtz believes in empowering teachers to teach. Dr. Holtz does not support Common Core.

Meat and Booze raffle is April 8th at the Light House. The raffle begins at 3:00PM sharp and ends at 5:30.

We are developing core values to place on our website. Once developed these core values will help us discuss membership with potential new members.

Remember to sign up for the Republican State Convention which will be held in the Dells 12 – 14 May 2017.

LOOKING OVER THE HORIZON:

This year our picnic is in Pella on July 25, 2017. The number #1 goal in 2018 is to defeat Senator Tammy Baldwin (Also get Republicans re-elected). As more people announce interest or intent to run for US Senate I will attempt to get them to speak at our picnic. If you have any suggestions please let me know and include contact information.

The Shawano County Library Consolidation process is looking to be a reality in 2018. All of the locations have passed resolutions to be part of the system and we will be working on individual contracts with each of them in the next few months.

At last month’s board meeting, Shawano County approved an agreement with the Historical Society which was long overdue. Maintenance, liability insurance and other issues were all addressed and consensus was reached. We were pleased to make this a good fit for all.

Work with the County Board, Stockbridge PD, and the Shawano PD to build and evidence building that would work efficiently for all agencies and save money long-term.  (existing buildings were looked at and found not to be an option for this project and would actually cost more than just building)

State of Wisconsin
From the desk of John Ainsworth

The Governor in consultation with his Budget Director informs his Cabinet of what is expected of each of them regarding their budget. After consultation with each department head, the Governor’s budget bill is drafted and sent to Legislature. As soon as it is introduced, the budget bill becomes public and the lobbyists get busy. Each makes his case for more funding for his special interest. No one ever accepts the amount of funding as excessive or even adequate. If any special interest is successful in gaining some additional funding, another special interest will have to accept less…..OR YOUR TAXES WILL INCREASE! Your taxes are the major funding source, among several, and the state budget is required by law to be in balance.

Several public hearings will be held on various portions of the budget bill within the Capital and throughout the state. These hearings give the general public an opportunity to offer their input into the process. Generally speaking, most of the public who appear at these hearings have one goal in mind. Their goal is to secure more funding for their favorite state-funded program. THIS MEANS IT IS VERY IMPORTANT FOR CONSERVATIVES TO ALSO APPEAR AT THESE BUDGET HEARINGS! The nearest public hearing for folks in our area will be held in the Marinette High School auditorium on Friday, April 21st, from 10a to 5p.

Each House of the Legislature then passes their version of the Governor’s budget bill. With both Houses now controlled by the same political Party as the Governor, there are likely to be few, if any, amendments attached to the bill. There will still likely be many, maybe hundreds, of amendments offered by the minority Party. Members make these offers to prove to their constituents that they are making a legitimate effort for their district or for their favorite cause. Some may even offer amendments just to achieve coverage in their local press.

If a different form of the bill is passed by each House of the Legislature, it goes to a conference committee for reconciliation and is then sent back to the Governor for his signature. The Governor may veto all or parts of the bill but his authority has been slightly reduced to prohibit vetoes of single words or even single letters which may have the effect of completely changing the intent of the Legislature. 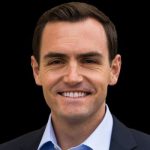 Congressman Mike Gallagher continues to reach out to his constituents. On March 17, 2017 Mike held a cigar meeting using a conference call. The topic was the health care repeal and replace being discussed in congress.

The discussion centered around three areas. First -where we are at now is negotiations. The President & Vice President are very much involved and meeting with various factions of congress to discuss options. President Trump is demonstrating leadership something not seen in DC for several years. America is witnessing legislative action played out in the public eye. I will go out on a limb and state that we have not witnessed open public debate since Newt Gingrich was speaker of the house.

Second –Mike shared some of the things that will occur in one of the three phases of the health care bill overhaul. Medicare costs will be controlled by states receiving block grants from the federal government. The sale of insurance across state lines would occur in phase three. Health savings accounts would be allowed in phase two. Mike explained the tax refund in a way that I had not heard previously. (EXAMPLE: If your employer provides insurance this is essentially income which is not taxed. In the Republican proposal those that do not have employer provided health insurance would receive a tax credit.)

Third -Mike asked us what we were hearing and what we thought. Republicans have said since 2010 that if they had a majority they would fix it. Today they have a President and both houses but Republicans appear unprepared. Voters are afraid that they will drop the ball and fail. Voters are suggesting that the Republicans use the 2015 repeal that was placed on Obamas desk and give that to Trump. Voters are critical of the current bill as being too liberal (Obama Care Lite) and they should begin with a much more conservative bill and negotiate from that point. Many are just very concerned with the three phase concept.

Last question – Mike asked was how he should vote. The majority on the phone stated that Mike should vote “NO”.

NOTE: Kathy Fritz (Vice Chair Waupaca) ran into Mike at a parade on 18 March in New London and Mike said that several very conservative items have been put into the bill since our phone conversation.

NOTE: Speaker Paul Ryan pulled the bill and never brought it up for a vote.

28 March = Mike stated that as the Bill was he would not have supported it. Mike was frustrated with the lack of a sense of urgency to get things done. Instead of Congress taking an April break Congressman Gallagher thought they should remain in secession and get things done.

Mike and other members of this Congress continue to work on term limits.

Nothing from the Senate at this time. 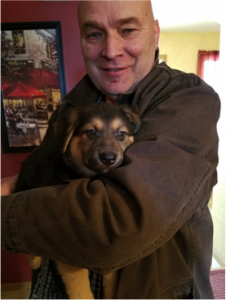 Tank graduated from puppy socialization course Monday 24 March. Puppy Kindergarten begins April 10th. Tank loves kids and I am hoping to have Tank with me on parades this year.

People often ask how they could help fight the good fight. Here are some suggestions:

Parades are a great way to boast our conservative pride! Please consider joining us for an upcoming event. A large group shows the strength of our party!